You are logged in as a CMS user. Return to Site Manager X 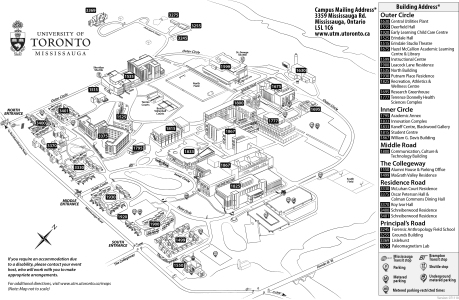 The story of Erindale College began when the University of Toronto purchased 150 acres of land along the winding Credit River in the early 1960s, comprising farmland and an elegant 1885 stone house, Lislehurst, in a village called Springfield-on-the-Credit. Lislehurst is now the residence of UTM principals and their families. It was named a heritage property by the City of Mississauga in 1985.

The next decade began with the graduation of the first Erindale class of 90 students in 1970. The campus entered a period of steady growth, with the South Building, designed by Raymond Moriyama, opening in 1973. The first new academic building, the Kaneff Centre for Management and Social Sciences, opened in 1992.

Erindale College became known as the University of Toronto at Mississauga (UTM) in 1998 and the following decade saw the construction of innovatively designed and award-winning buildings, such as the state-of-the-art Recreation, Athletics and Wellness Centre (RAWC). The Communication, Culture and Technology Building (CCT), won a Governor General's Medal in Architecture in 2008.

Over the years, UTM has always maintained a close relationship with the community. Mississauga Mayor Bonnie Crombie is a welcome visitor to UTM events, and UTM has been involved in many civic initiatives, including the Healthy City Stewardship Centre and the City of Mississauga Economic Development Advisory Council.

This close relationship extends to UTM’s academic programs. Each professional graduate program within the Institute for Management & Innovation includes a paid, full-time industry placement, while the Mississauga Academy of Medicine, located in the Terrence Donnelly Health Sciences Complex, partners with hospitals affiliated with the Mississauga community.

In fifty years, U of T Mississauga has transformed from a constituent of the Faculty of Arts and Science to become the second-largest division of the University of Toronto with 980 faculty and staff, 145 programs, nearly 14,000 students and more than 54,000 alumni around the world.

This is from the quartex-front-end repo.